Robotics: changing the face of head and neck surgery 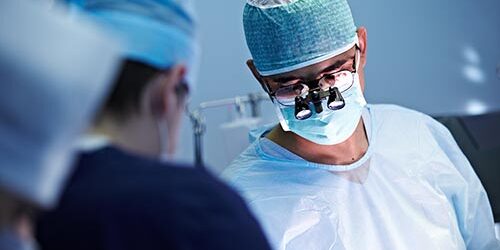 Oral cancer has been traditionally very difficult to treat – but could robotic assisted surgery provide the solution? We asked consultant oral and maxilofacial surgeon Mr Luke Cascarini, one of the few surgeons in London offering robotic surgery for head and neck cancer.

Robotic surgical techniques are promising because they allow us to access a very small space and operate very precisely using special instruments. This can be particularly useful in accessing parts of the head and neck when treating oral cancer.

Oral cancer is on the rise. We are not completely sure why this is happening – but it’s thought to be linked to an epidemic of the human papilloma virus (HPV). HPV is present in one in three people in the UK . Most people are able to fight off the virus, but in some cases it can lead to cervical cancer, and less commonly cancer of the mouth and throat.

When someone develops a tumour in the mouth or throat, there are a number of ways to treat it.

Surgery to remove tumours has traditionally carried a high risk of complications. One approach is to enter the mouth through the jawbone to access the tumour directly. However, the patient has a high risk of going on to experience difficulty with speech and swallowing, jaw pain, misaligned teeth or a change to the cosmetic appearance of their face. Another approach, which enters the head from the back via the pharynx, avoids most of these problems with the exception of swallowing difficulties, but can also lead to developing a pharyngocutaneous fistula.

Neither surgical approach is ideal, so instead non-surgical treatment in the form of radiotherapy is often recommended. Even this, however, carries the risk of developing swallowing problems.

Robotic surgery to the rescue?

If robotic surgery can be shown to be comparatively effective at treating tumours in the head and neck, while avoiding the risks of current treatment approaches, we may see a change in the way oral cancer is treated. So far, there has been no randomised control trial (RCT) comparing robotic surgery to radiotherapy in the treatment of oral cancer, but evidence of its effectiveness is emerging.

One large retrospective study has shown an improved three-year survival in patients with oral cancer who were HPV-negative, and a slight (but not statistically-significant) improvement in the HPV-positive group. This suggests that oncological outcomes are at least as good among robotic surgery patients compared to those who received radiotherapy.

Furthermore, when the first series of patients received robotic surgery in 2006, swallowing difficulties were reported in just 4% of patients.

As well as treating non-recurrent primary tumours, robotic surgery may prove useful in even trickier circumstances:

In some cases, where the tumour has not been fully removed or has grown back aggressively, a more radical approach known as salvage surgery is considered. Open surgery carries even greater risks of speech and swallowing problems, as well as the possibility of needing a tracheostomy.

Making use of robotic techniques may be the key to improving outcomes for patients. Studies show that blood loss, time spent in hospital and time spent recovering are reduced in patients who had robotic-assisted salvage surgery. In some situations, robotic surgery can be used in addition to conventional reconstruction techniques.

Finally, in situations where cancer has spread to the lymph nodes, robotic surgery may provide access to what is traditionally a very difficult space to reach. At the moment, the number of studies discussing the feasibility of robotic surgery is limited. But in time robotic surgery might prove to be a game-changer in the treatment of metastatic cancer.

At the moment, robotic surgery for oral cancer is an emerging field. More controlled trials are needed to be certain whether it offers benefits over current treatment options. In the future, however, we can expect to see further improvements in the systems we use, with the potential to open up even more areas where robots can be of assistance.

Jawline augmentation: all you need to know
April 2022

All you need to know about oral reconstructive surgery
April 2017