Following a bone fracture and the insertion of a metal plate, Frances’s knee and foot were misaligned causing her pain and limitations to her lifestyle 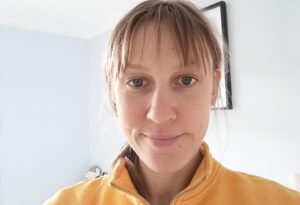 Frances had a metal plate inserted in her left leg following a bone fracture in Peru in 2015. It had always caused her pain when walking, especially in winter. Her foot and knee were also misaligned, meaning that her knee pointed inwards and her foot outwards. This caused her to walk with a slight limp on her left leg. She was booked in to see Professor Heidari by her GP following an X-ray which showed the deformity, so that he could take out the metal plate and correct the angle of her foot.

Frances explains the impact of this metal plate: “It was impacting all elements of my life. I am someone who loves walking, hiking and sport. The pain I felt in my leg was too great to go on long distance hikes, and walking became an issue. I used to cycle everywhere instead of walk as it was easier and avoided the pain. In winter the pain would become so great I sometimes couldn’t walk at all. Because of the deformity meaning my foot was sticking out slightly, I wasn’t able to run properly and so couldn’t partake in any serious sports. No amount of muscle building or physio rehabilitation helped, and I would just limp along. I still had no idea why and was told by doctors that it was to do with physio, muscle and leg rehabilitation.”

Professor Heidari recommended the removal of the metal plate in Frances left leg and rotation of her lower left leg with a Taylor Spatial frame.

Frances explains her expectations before this treatment began and how Professor Heidari explained her options: “I was very scared before having the Taylor Spatial frame surgery. I spoke to various consultants and was told it would take anywhere between 6 months to a year. I had also Googled images of the leg frame and had spoken about it with people who had previously had the surgery. I am freelance and have a physical job, so I also had the stress of not being able to work during surgery. However, speaking with Professor Heidari really helped. He gave me all the options that I could choose to have done on my leg. 1) That we remove the metal plate and take no further action (which may alleviate some of the pain I was feeling from the metal) 2) That we use a metal rod through the leg to take out the metal plate and realign the leg or 3) That we use the Spatial frame option. This made me feel in control of the process.   He was very clear in which he felt was best for long term healing and benefits, the Spatial frame, as it removes room for marginal error in the correction of the foot rotation; in being able to slowly rotate the leg once the frame is in position, you can get the alignment of the foot perfectly. As I was having controlled, correctional surgery, he told me that I would only need the frame for 4 months. He was extremely confident in this and it put my mind at ease. Where other doctors had got this estimate incorrect, he was correct.”

She goes on to describe how her leg is now: “The fear of having the leg surgery and the anxiety that came with it was much greater than the actual surgery itself. I am so happy with the treatment from Professor Heidari and his team. My leg is so much better than it was before. It has only been a month after finishing the surgery and I don’t have any pain around the old metal plate site, and my foot is perfectly aligned. I cannot describe how happy I am to have gone through with the surgery. It has changed my life.”

She continues to state what she can now that she couldn’t do before: “My limp is completely gone. My foot is much straighter, and this means that I am able to walk properly, as I had done before initially breaking my leg back in 2015.  I can go on longer walks with no pain at all, which is amazing. I have been doing low impact exercise to build back the lost muscle in my leg and it is recovering really well. I am nearly back to full strength. After this initial muscle rebuild, I have no doubt that I will be able to run, skip, and take on higher impact exercise with no pain.”

Frances has this advice for patients with similar problems: “If you have a similar problem to mine and you are thinking about having a metal plate that is causing pain removed, or correctional leg surgery for leg alignment, I highly recommend taking the leap. I was scared at first, the 4 months with the Spatial Taylor Frame on, and the 2 months physio and rehab after – are totally worth it. My quality of life has gone up by so much. I understand that the process can be daunting, but the benefits afterward outweigh everything. It is better to have your leg fixed properly, than to take shortcuts with other types of surgery.”

She continues: “I would also highly recommend Professor Heidari and his team to do this. He was so knowledgeable and confident in his assessment and capabilities and I was in extremely safe hands.  It is the best experience I have ever had as a patient within the NHS. Finally being referred to Professor Heidari and his team was the best thing that has happened to me. My experience with his team was truly amazing. He is extremely confident in his approach which put me at ease. One thing that I was particularly impressed with was that he is obviously very interested in his area, which means that he is keen to explain everything properly, in very clear terms. I never felt like I was asking a stupid question and I was given a full understanding of all the elements of the operation of the rehabilitation afterwards. I felt really well looked after from before the operation – to the care afterwards. The team were very easy to contact by phone should I have any questions, at any point.”

In conclusion she says: “My leg was holding me back from doing the things that I love and now I feel like I have a whole new body. The change really is quite remarkable and there are plenty of things which I didn’t realise were so hard to do that are now easy. I would highly recommend taking the leap for leg surgery in the safe hands of Professor Heidari and his team to anyone experiencing my problems, it was totally worth it. I would like to thank Professor Heidari and his team.”

Professor Heidari summarise the treatment: “It took Frances a long time to get the correct treatment for the rotational problem in her leg, which is difficult to diagnose and treat. Her tibial fracture was incorrectly fixed with a metal plate, causing a malalignment of her knee and foot leading to pain and limitations to her lifestyle. Performing an osteotomy and using a Taylor Spatial frame, I was able to slowly rotate the leg with the frame in position, to get her foot perfectly aligned.  This method removes room for marginal error in the correction of the foot rotation. I’m delighted she has lost her limp and can now go on longer walks with no pain at all, do low impact exercise and is nearly back to full strength”