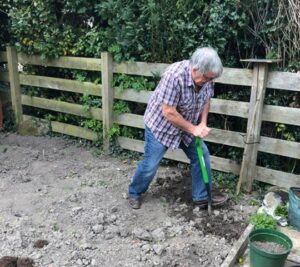 Chris had a knee injury which dated back over 50 years following a bad rugby tackle. Unsurprisingly he stopped playing rugby and tried football, although he then suffered from knee strains, so he gave that up too.

He put his continuing knee pain down to wear and tear from playing cricket for over 30 years. About ten years ago he went to his GP as his knee had got gradually worse, giving way and locking from time to time. He was sent for a scan and then had an arthroscopy (keyhole surgery to look inside his knee). After that things seemed to settle down, but then in 2018 it started getting worse again with the pain increasing, so he went back to his GP.

This time he was asked to be referred to the Dreadnought Unit at Guy’s Hospital. This service is dedicated to treating Merchant seafarers who are given priority treatment so that they can return to work at sea quickly.

By this stage Chris was finding many things more difficult. He was managing to play golf a few times a week, but this would result in him needing to have his leg elevated after a round. He had stopped cycling and not being able to get out and about was getting him down.

Chris was referred to Mr Raghbir Khakha and explains the first steps: “He went through everything and explained it brilliantly. Mr Khakha was against me having a knee replacement as I was too young and he recommended an osteotomy.”

Chris gives his feedback after the osteotomy operation, which aims to alleviate the pressure on the painful part of the knee by realigning the bones above and below the joint: “It has been a godsend. Having it done was painful at times and I was off work for 3 months, but I am now back out playing golf 3 times a week, out walking with no problems and I have no pain. I know I made the right decision.” 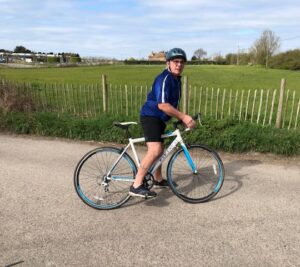 Chris has recommended Mr Khakha to a number of his work colleagues and says: “I Can’t praise Mr Khakha and the osteotomy operation enough. I felt a bit of a fraud at my physio appointments as I felt so good! I was able to handle all the machines in the gym much more easily than people who had had a knee replacement and I was discharged after a month.”

His advice for patients with similar problems: “Have it done without a doubt. Yes it was painful initially, yes the recovery was long, but I would still recommend having it done. “

Chris summarises his experience: “Mr Khakha is a really nice guy, and he comes over very well. He is definitely a people person and is very up front and clear about everything. He doesn’t hide anything and is very truthful and fair. I was in no doubt about what would happen. All the team were brilliant too. Overall, I couldn’t fault the experience at all. Have total trust in Mr Khakha as he knows what he’s talking about”.

Mr Khakha concludes: “I’m so pleased Chris has done so well after his osteotomy. A knee osteotomy can usually help to significantly delay the need for a knee replacement in younger patients such as Chris, and in many instances, remove the need for it altogether. In patients whose leg bones are not correctly aligned, an osteotomy restores the normal alignment of the knee joint by correcting the shin or thigh bone, relieving pain and removing pressure on the arthritic or injured area of the knee as a result.”