Derek sought treatment for his aching shoulders with Mr Noorani 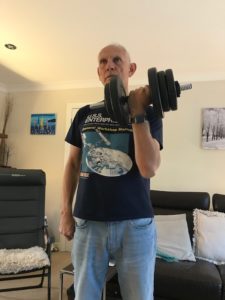 60-year-old Derek initially thought his aching shoulders were caused by arthritis brought on partially by his active lifestyle involving sailing and doing DIY. In 2019, after his shoulders had got progressively worse, he underwent MRI scans and was given the option of surgery and physiotherapy or carrying on as he was. He continued his active lifestyle without treatment, but his shoulders’ condition worsened, so he went to see Mr Ali Noorani who advised him to have physiotherapy on his right shoulder and diagnosed evidence of a supraspinatus plus minus subscapularis tear with an unstable biceps on his left shoulder. Mr Noorani recommended rotator cuff surgery on Derek’s left shoulder, which was successfully carried out.

Derek then came to see Mr Noorani again with frozen shoulder on both sides. Mr Noorani established that Derek’s left shoulder had good muscle control and strength and the MRI scan showed the rotator cuff was intact. As this shoulder had already been operated on, Mr Noorani wanted to address the new problem with Derek’s right shoulder, which had not been previously addressed. He recommended a capsular release via keyhole surgery (arthroscopy). During the operation Mr Noorani assessed the rotator cuff and biceps which did not require further correction.

The following month, whilst the right shoulder had done well following the release, Derek was still experiencing stiffness in his left shoulder which was almost 10 months postop from the rotator cuff repair, so they agreed Mr Noorani would perform a capsular release on this side too. During the surgery, which went well, Mr Noorani noted how well Derek’s rotator cuff repair had healed.

Derek praises Mr Noorani’s diagnostic abilities and advice, saying he was, “clear that my left shoulder needed surgery whereas previous expert opinion gave me no clear guidance. He is very good with follow-ups and being clear about what I could do at each stage.”

Derek was also impressed with the way Mr Noorani treated his complicated right shoulder, particularly how he was able to tell him what he could see during his keyhole surgery (arthroscopy) and provided ‘before’ and ‘after’ videos of his shoulder release, so he could see exactly what had happened. He describes Mr Noorani as: “Very supportive and helpful and focussed on getting me back to my activity level.”

Derek, who is now doing some painting and decorating again, concludes by advising: “It is a long journey. I have a friend who hasn’t had surgery and he is at a worse stage than me. I can do a lot more with my left and it’s in a stronger position and more comfortable. You need to be patient and do the physio.”